Throughout toddlerhood (that’s a thing, right?) our little ones are guaranteed to get some kind of illness. So far we’ve had coughs and colds, sick bugs, allergic reactions and tonsillitis. Here are a few of my top toddler sick day tips!

It’s a given that you’ll most likely be giving your little one medicine. Since the girls first started having Calpol, we’ve always had at least one syringe in the medicine box. When Amelia had tonsillitis and needed antibiotics, one of the bottles came with a spoon instead of the syringe. As the syringe has the numbers for the measurements on, we found it so much quicker and less of a fuss to give medicine this way instead of trying to get Amelia to open her mouth for a spoonful of medicine that she didn’t like. 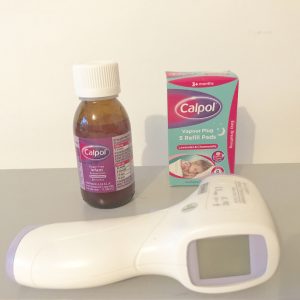 Our No-Touch thermometer is such a huge help for when we need to check the girls’ temperatures too. You can read more about it here.

Any signs of a stuffy nose and we plug in our Calpol Vapour Plugin. It’s definitely worth every penny and they’re actually quite reasonably priced. The refills come in packs of 5 for around £4. You can find it in most supermarkets or chemists.

What do you always want to do on a day you’re feeling rubbish? I know I almost always just want to curl up on the sofa in my pj’s and watch a film.

Along with my previous point, be it that your little one still has set nap times (you lucky so and so!) or that your little one only usually has meals at certain times of the day – not judging, the girls eat as soon as they wake up, bang on midday and no later than 5pm but not before 4:30pm – forget the routine. Be it for the first couple of days, which are usually the worst, or for the whole time, your little one is unwell. You’re best to just go with the flow, forget the housework, get acquainted with the sofa and if your little one falls asleep, let them. Rest will be amazing for them. If they ask for a treat but refuse their lunch, so be it, as long as they’re eating – that’s the main thing.

Of course, part of “forgetting the routine” comes scrapping the housework too. I know when the girls are ill, I like to dedicate more of my attention to them than usual. Usually, they can be happy playing in the living room, while I clean the kitchen. When they’re ill, I have every urge to just clean the entire house from top to bottom – this comes once the girls are over the worst of whatever the sickness is, instead.

We’ve just recently got over a house full of colds and a sickness bug – hopefully, that’s it for illnesses for a while!

What are your toddler sick day tips?