*This post includes gifted items from Hipp Organic and is in collaboration​ with Hipp Organic as part of their #FeelHipp social media campaign.
Weaning always felt like such a daunting time for us with both girls. I know that we both worried about it all so much and probably too much!

“To begin with, food is just for fun.”

This is something that I had to keep reminding myself, because the girls were both still having milk (formula) up until they were 1 year old and we began weaning at round 6months for both of them.
Apart from the gumming of some marmite on toast that Amelia stole off me when she was around 4months old – haha! 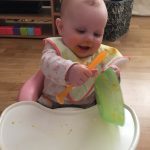 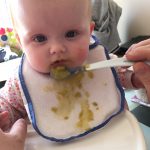 Initially, we began weaning using jars of baby food and both of the girls always enjoyed the Hipp Organic baby food jars. We started off by spoon feeding them around half a jar of food (if that), before their lunch time bottle.
After a couple of weeks of getting the hang of the new feeding routine, we then slowly added in another meal at our usual dinner time (around 5pm). This usually consisted of the other half of the jar from lunchtime, depending on what it was – I say this as we did switch between sweet and savoury jars for the lunch time meals. 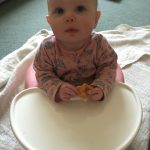 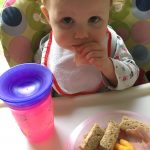 Some days we let them explore food more by introducing cut up fruit and vegetables, or even a small bit of toast! This was great to get them used to different textures of food and also to learn to feed themselves.
When we introduced breakfasts, we usually went with toast but I must admit this was mainly down to my own laziness but also tiredness given that the girls are 13 months apart! Other days, they both enjoyed the porridge from Hipp Organic and we’d mix it with their usual milk though as they both had eczema flair ups if they had too much fresh dairy – so we limited their fresh dairy intake how we saw it best to.

More recently the girls have been enjoying the new Hipp Organic musli, and they’re 2 and 3 now so that really shows there’s no limit to what age our little ones can have scrummy food that they enjoy – without us parents worrying if “we’re doing right”!
I know that feeding the girls food from Hipp Organics wide range has given me so much peace of mind from the first step of weaning up to feeding them as fussy toddlers now! Thanks to Hipp Organic, I’ve been #FeelingHipp knowing I’ve given my girls the balanced diet and variety that they need!

2 thoughts on “#FeelHipp From Milk to Food”