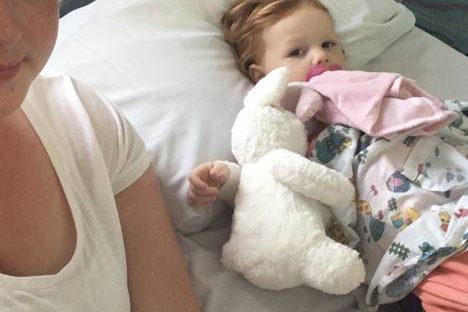 Where do I start. It’s been a tough ride so far and even though it wasn’t quite as hard as we expected, it was still very mentally, physically and 100% emotionally challenging. This will be a long post, please grab a cuppa and put you feet up!

Lets start from the beginning, or try to. Back in December 2016, we, along with other family members noticed that Amelia walked with a slight limp. This was also around the time that when changing her nappy, I noticed her hip was just clunking back instead of moving freely. We tried our best to get her to see a doctor before Christmas 2016, but from what I remember it was the week before Christmas and they were fully booked.
The first week of January 2017, we managed to get her seen by our family doctor, who then referred her straight over to A&E at Birmingham Childrens hospital for an X-Ray. He referred her straight there as he also noticed everything we had, but knew the importance of getting her seen quite quickly. The X-ray did show some abnormalities but we had to return a week later to speak to a consultant and get a formal diagnosis. This appointment concluded in Amelias DDH being diagnosed and a loose action plan of what were to happen next.
We then saw the consultant again for a more in depth appointment where she told us what the possible outcome would be. What we knew so far was that Amelias left hip, ball joint, had not formed properly and the socket itself was shallow. The consultant suggested waiting until Amelia was around 18months old to see if the ball joint would continue to form. Regardless of this, we were told that Amelia would be facing 12 weeks or more in a Spica cast after having her surgery (femoral osteotomy).
In July we have a phone-call very out of the blue, asking if we were available for Amelia to have Surgery 2 weeks later, we agreed and the panicked. We had nothing prepared, no suitable car seat or pushchair and we definitely weren’t mentally prepared for it. After scouring facebook groups I managed to find a suitable car seat (Britax two-way elite), we luckily had a spare pushchair which my mum stored which was wide enough to fit the cast too. A week after the initial phone-call, we called the hospital to ask what the pre-op procedure was as we hadn’t received anything through the post, to then be told that the surgery was cancelled and they’d be in touch to reschedule. What a blow that was, we’d just about got our heads around it all to be told nope, it wasn’t going ahead. On the plus side, we enjoyed every moment of summer as best we could with Amelia falling often.
Shortly after my birthday, so the end of July, we received a pre-op letter for the end of August. When that came around Amelia was weighed and had a blood test and we were told what to expect on the day with the anaesthetic, recovery etc. There were many, many tears from me, I couldn’t help it, it’s just a natural thing to do. My husband was holding his tears back too. That’s our baby they’re talking about.
12th September 2017, surgery day and boy will I remember that day forever. We got up bright and early to head to the hospital for 10:30 with Amelia who fasted from the night before. When we got there the staff were absolutely brilliant, as soon as we walked into the play ward, I got chocked up. All the children were waiting to go for some kind of surgery and it broke my heart. As we got there early Amelia was super content playing, drawing and generally running around.

The consultant came down to talk to us, and she was weighed and had her height measured. From what I remember, we took Amelia to anaesthetic around midday, where we then played the waiting game. We grabbed some food and then waited on the ward to be called when she was in recovery and waking up. My goodness the wait felt so long. Beforehand, the consultant had said to us that if she needed the lesser of the two surgeries (if the ball joint had formed more since her previous X-ray), the surgery would only take around 2-3 hours with a recovery of 6-8 weeks in a Spica cast. If not then the surgery could be up to 6 hours with a casted recovery of 12 weeks or more. As you can imagine, the waiting was hard, especially with not knowing which outcome it would be. We expected the longer surgery and recovery, especially after the 4-5 hour waiting point. I think it was around 5pm that we were called to go up to Amelia, such a relief. We had our baby back, yes she was in a cast but she was back with us where she needed to be.

When we took Amelia back to the ward, we waited for the consultant to come and see us, we had no idea which surgery she had at that point. We were adamant that she would be in a cast for 12 weeks or more. The consultant came down and gave us the news that she had performed what I believe is a Salters Osteotomy, instead of the Femoral Osteotomy which we expected and had discussed at previous appointments. The Salters had the shorter recovery time and this was the best option as Amelias hip joint had continued to form since her previous X-ray. Boy were we relieved, only 6-8 weeks to try to entertain her while she was in a cast and slight chances that she would be back on her feet for our wedding day (selfish thoughts, we know).

As the time was getting on and Amelia was pretty drowsy from the anaesthetic, daddy went home to get some sleep and I stayed with her. That night is up there with the toughest nights I’ve had with either of the girls, or both, so far. When I eventually fell asleep, every 2 hours I was being woken up by a nurse prodding my feet so I could give the ok on Amelia having medication (morphine, calpol and ibuprofen). In the morning, Amelia woke up before I did and just lay there having a look around (I was told by a nurse), when I woke up and greeted her with a big good morning kiss, she told me to go away. She told me “No mummy, don’t like you… I stuck”. I stuck. My little girl was telling me she was stuck. I couldn’t help but break down and I’m not one for crying in front of people, I’ll tell you that. I briefly spoke to a nurse and said I was getting some air, I didn’t know what else to do, she wasn’t eating, she wouldn’t look at me and I felt like I was on my own. I called my husband and he’d just woken up and would be over as soon as he could. I quickly popped to the hospitals shop to get a balloon and went back up to Amelia. She was happy again, the lovely lady, whose daughter was in the next bed, had managed to get Amelia to eat and she was smiling again. “Hello mummy” she was happy to see me and I was so so happy again.
I’m cutting this off here, it’s been an emotional time typing this up, but I want to talk about the discharge and the experience of Amelia being in her Spica cast separately. If you have any questions about DDH, or are starting a similar journey yourself, please do not hesitate to ask me anything or we can just have a chat!
Read the follow on post here.